Kate is a full time painter, whose commute to work is through her vegetable and flower garden.  She maintains a studio behind her home in the middle of the village of Middlebury, Vermont, where she has lived and painted since 1991. Her portraits and paintings hang in public and private collections across the United States and abroad.

In 1998, Kate created the illustrations for Amanda Hesser’s Cook Book, The Cook and the Gardener. Her illustrations have appeared in Horticulture Magazine, Harrowsmith Country Life Magazine and Vermont Magazine.  Noted garden designer Gordon Hayward used Kate’s work in his book Art and the Gardener. Kate received a Vermont Community Foundation Grant in 2000 to develop a set of botanical illustrations of some of the endangered plant species of Vermont. She has been recognized by the Garden Writers Association of America with their Quill and Trowel Award of Excellence for her illustrations. 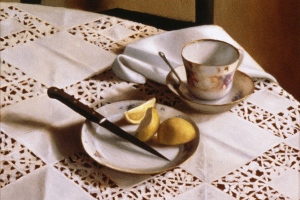 Along with organic gardener Judy Stevens of Golden Russet Farm and Barbara Ganley of Digital Explorations and Open View Gardens, Kate launched the garden to kitchen column Patchwork: Three Gardens, Many Kitchens in the Addison Independent, a twice weekly newspaper, in 2010.

Kate serves on the Board of Directors of the Middlebury Natural Foods Coop.

7 Responses to About Kate