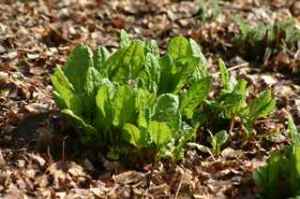 It is a dilemma.  There’s not much to eat in my garden yet, except sorrel, which is just about ready to pick. We managed to crush the rhubarb when taking out a tree, so that is moot (we hope it is going to live to see another season). There’s a crowd of parsley that managed to winter over, but it will probably bolt and set seed early, so I have several pots of new parsley ready to go into the ground.  Last summer’s Bronze Fennel is also coming back (which seems strange), but it, too, will probably bolt early and set seed which I’ll collect. And I don’t have the luxury of an asparagus bed.

So, if I want to eat locally grown fresh food, that is to say, when it is in season, how do I handle the question of…. ramps?

They’re here. This is their season: fleeting, flavorable and indigenous. Two weeks ago, when John and I were biking on Cape Cod, where spring was slightly ahead of Middlebury, the local pub in Chatham served asparagus on a bed of lightly steamed ramps. This was my first taste of something very green that was tender, aromatic, pungent without being overwhelming, garlicky and oniony (if there is such a word) all at once. The flavors were not strong; they simply tasted fresh. 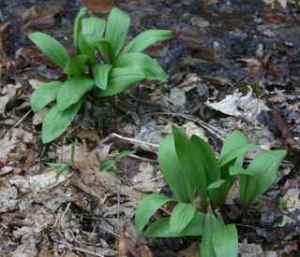 But it is complicated. Ramps, otherwise known as Ramson, broad=leaf, or wild leeks, (Allium tricoccum), are wild onions native to North America. They grow from Georgia to Canada in moist places in deciduous woods. The base of the plant has a white bulb a little larger than a scallion, and the bright green leaves, unlike the leeks I grow in my garden, are broader and softer, something like those of lily of the valley (which, by the way, are poisonous). Sometimes sporting a burgundy-tinged stem, both the bulb and the leaves of a ramp are edible, especially in early spring. And they are delicious.

Over the past two decades of a growing local food movement, ramps have become prized in upscale restaurants as the first fresh native food of the spring. In the mountains of Appalachia, where ramps have been harvested for hundreds of years, there are festivals and celebrations for the return of spring’s first edible green. The result?  In some locations the local ramp population is being decimated. The price for ramps in cities has gone as high as $12.00 a pound, which has attracted crowds of new foragers who scrape the woods clean. They have been protected in Quebec since 1995; it is no longer legal to dig them. In Maine and Rhode Island, ramps are “a species of special concern.”

So do I eat this first green? Simultaneously I wonder: is there an opportunity here for someone to cultivate ramps?

I call a friend who knows where to find them. I simply want to see them in the wild. “I am going to blindfold you on the way there, unless you can keep a secret,” she says. I feel like we are heading off on a rare truffle hunt.

“In Vermont you can pick only what you yourself will eat,” she mentions. “That’s the law.” 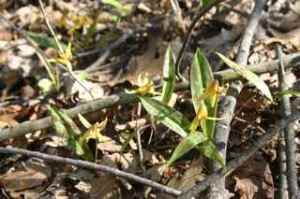 Trout Lilies carpet the woodland floors in this season

We spend several hours on a beautiful hike. The forest floor—moist and open beneath budding deciduous trees, and carpeted in some places with banks of trout lilies—boasts not a single ramp. On some level, I am relieved and disappointed at the same time.

So imagine my surprise when I walk into the co-op and find a bucket of freshly harvested ramps sitting in water, at $9.99 a pound, in the front of the vegetable section. The sign reads “Local, Bristol.” I pause, and then I buy half a pound, enough for dinner for two. I fervently hope these have been harvested sustainably.

There’s a world of wild plants out there that can be harvested — hopefully in a responsible and sustainable way — that I know nothing about except that what is in our gardens originally came from outside the garden, and I would like to know more. Colt’s Foot wine, anyone? Nettle beer? Curly dock Soup? 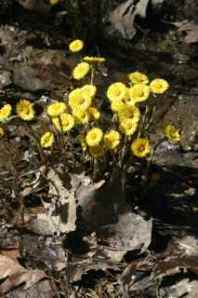 Colt's Foot grows profusely along roadsides, one of spring's first flowers. The opposite of Wild Leeks, its leaves follow later.

1) Before harvesting ramps, check with your local extension service for best practices, and to see if harvesting is restricted in your area. Follow the rules. 2) Harvest no more than 10% of the patch (some folks say no more than 7%). 3) If you pluck the entire plant, slide your fingers down along the bulb, and pull gently, trying not to disturb the forest floor. 4) Another option is to remove some of the leaves from smaller plants, leaving the plant to grow. 5) The plants send up a flower stalk in July, after the leaves have died off. Do not disturb them.